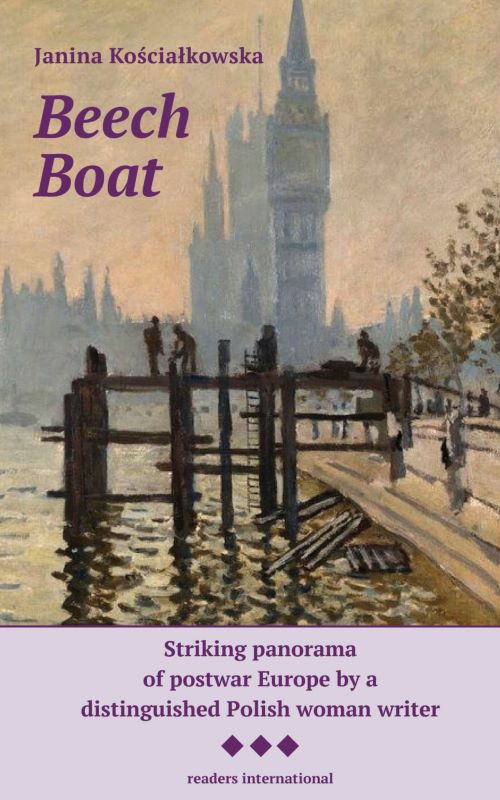 “A fictional memoir of power, subtlety and significance….” PUBLISHERS’ WEEKLY

It is 1945 in London, a city of exiles. Warsaw is in ruins, Lwów is in another country, and London’s Poles, with their long history of partition, resistance, and exile, are trying to understand how to live with genocide, Hiroshima, Katyn and the world’s descent to ever lower circles of hell. The fall of Troy keeps coming to mind, and the few who managed to escape the ruins in their flimsy beech boats.

Janina arrives in post-war London, tortured by memories of her girlhood and the war, and stalked by the generations of previous failed exiles whose worn tombstones she used to visit at home in the Jasło cemetery. She finds a London teeming with other escapees, from the suicidal Nazi living next door to the stocky Mrs Kunegunda Grzesik, who has turned her practical hand to running a wildly successful ethnic restaurant.

Janina joins the literary and political ferment around Wiadomości, the émigré journal, and begins trying to earn a living from her art, making jewelry and painting porcelain at the Decorative Studio. She encounters her English neighbour, who shares his milk ration with her and tries to share his fervent belief in socialism, with which she already has cruel previous experiences from Soviet-occupied Lwów. She is commissioned to produce a frieze of painted tiles for another Englishman in Ealing, an attractively mysterious sophisticate with an intriguing painting on his wall of The Temptation of Eve. Walking home through blitzed London in the fog, Janina has a Faustian encounter with another devil who resembles a portrait remembered from her father’s old study.

Dreamlike, lyrical and philosophical, mixing memory, drama and deep feeling, this prize-winning European women’s memoir bring all these themes together in a convincing and powerful whole that has remained popular with Poles abroad and in the post-Solidarity nation at home, where Janina Kościałkowska’s works were only able to be published when she was 77 years old.

“An excellent writer… She uses a pure and polyphonic language embedded within classic Polish expression, but at the same time always fresh.” JAN KOTT