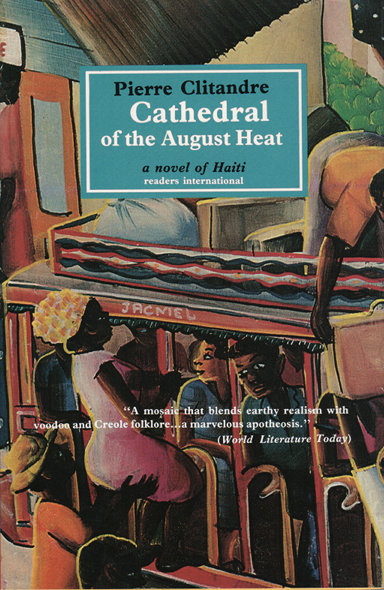 Cathedral Of The August Heat

“Recommended for general readers interested in the beauty of Haitian folklore and for students of Caribbean literature.” CHOICE

A richly coloured evocation of life in the slums of Port-au-Prince, using pidgin English to preserve the freshness of Creole speech rhythms.

The vibrant action of Cathedral of the August Heat leads towards the August Feast of the Assumption of our Lady, a date of symbolic importance for Haiti not only in religious terms but also politically as the first day of the uprising in 1791 that led to the establishment of the world’s first independent black republic and the first society to abolish slavery after the French Revolution. The struggle of these, the very poorest people of the Americas, still goes on today.

“Pierre Clitandre’s Cathedral of the August Heat is a compelling and captivating novel that takes us deep into the heart of a turbulent time in Port-au-Prince. Through the eyes of the witty and determined John, a tap-tap driver, we see the unique inhabitants of this gorgeously chaotic city in all their nuance and complexities. We witness their dreams and nightmares as they attempt yet another rebellion to change the course of their lives. This novel follows in the great tradition of those lyrical and political novels which portray the nuances of a world we think we know while unveiling both the beauty and horrors surrounding a nation and its people who, in spite of many attempts at destroying them, refuse to be either defeated or conquered.”