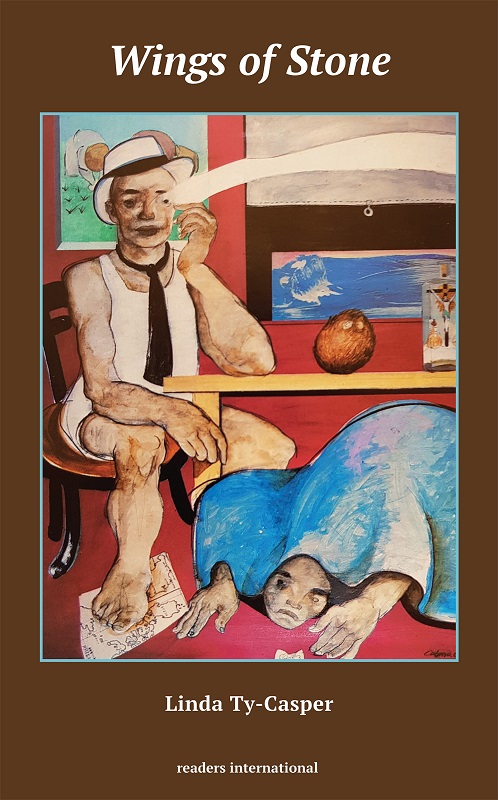 Johnny Manalo, a Filipino who has lived for years in the United States,sometimes illegally, returns home for a brief visit during the last years of the Marcos dictatorship. From his landing on the Manila tarmac where opposition leader Benigno Aquino was gunned down, through jetlagged reunions with family and friends, Johnny finds himself an alien in his own country, unable to grasp the physical, moral, and spiritual corruption that – from Marcos and his wife “Madame” on down –have consumed the nation’s soul.

If Ty-Casper’s earlier, brilliant novel Awaiting Trespass emphasizes contemplation, redemption and hope, Wings of Stone gives a nightmare picture of the mindless violence of martial law and the possible firestorm of civil war. Sadly, since the Marcos regime was toppled in 1986, the triumph of democracy has faded, and the situation in the Philippines today remains as Ty-Casper so powerfully describes it here.

“Ty-Casper’s writing is hypnotic and elliptical…the horrors of the twilight years of the Marcos regime glow through the haze, making this book significant.” KIRKUS REVIEWS

“The work of this Filipino novelist writing in English makes much that is published in the English-speaking world look trivial. It is yet another example of the enrichment of English literature by a Third World culture… Not that the West will be allowed much chance to appreciate the feat. Unlike, say, Latin Americans, Filipino writers have no literary kudos outside the Philippines. They do not necessarily have much in their own country…” SOUTH MAGAZINE